It would be hard not to know that October is breast cancer awareness month. Every one of my magazines have articles about the subject; there are constant reminders on the local news. And there are the walks. And in conjunction with the Student Science Club, the library has an exhibit about breast cancer. 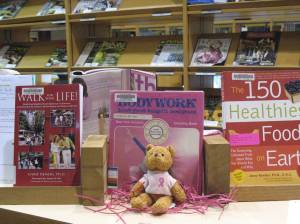 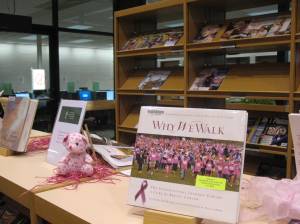 Any woman who has received the letter after a mammogram asking her to return for further tests can attest to the fear of breast cancer that seems almost innate in our culture. I have received that letter more times than I like to think about. And the thing is: I never get used to it. I never start thinking, “Okay, this is just something that happens to me. It doesn’t mean anything.”

No, each time, I am absolutely petrified by the chance that this time the letter is simply the first step to what will lead to a cancer diagnosis. And I have gone through several of those steps: the second mammogram, the third mammogram with the smaller paddles, the ultrasound, and the needle biopsy. Each year, I have been given a reprieve, told there’s no cancer. But I never take this for granted. And the next year starts the process again.

I often think of the other women who have shared the smaller waiting rooms with me, the ones to the ultrasound and needle biopsy equipment. I always pray that they too received good news. And I also pray for the doctors and researchers who may one day take the horror out of a cancer diagnosis.